Savior of the Square? Jacqueline Kennedy and the Preservation of Lafayette Park

During John F. Kennedy's presidency a battle was waged between modernists and preservationists over the fate of Lafayette Square.  Into the debate stepped First Lady Jacqueline Kennedy.  How her ideas influenced the plan that ultimately determined the Square's future can still be seen today.  Yet what about the Washingtonian whose name is less well known, but whose contribution was all-important?  Washington Walks founder Carolyn Crouch relays this little-known chapter in Washington, D.C. history. 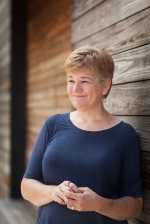 Carolyn Crouch is the founder of Washington Walks. She attributes her devotion to walking tours to her husband, who showed her the sites of his hometown on foot when she arrived to earn an M.F.A. in Acting from The Catholic University of America. She studied English and Art History as an undergraduate. She is the updater for Fodor's 25 Best Washington, D.C. guide.  Carolyn serves on the boards of The Welders, a Playwrights’ Collective and the Historical Society of Washington, D.C.