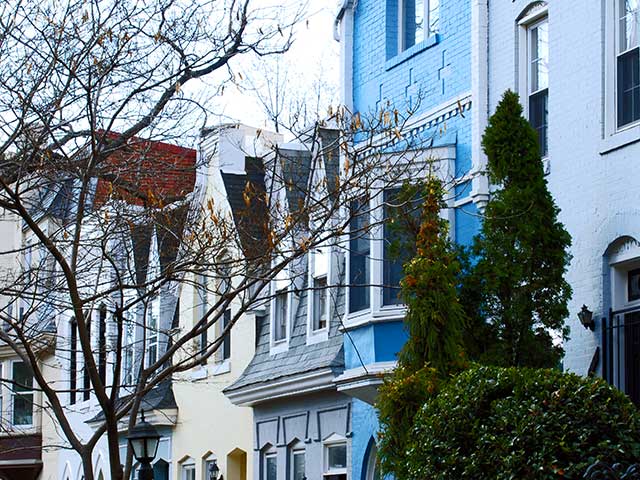 Originally a little port town called Hamburg, Foggy Bottom was later site of two breweries, a gas works and a naval observatory. While the neighborhood’s industrial character has vanished, you can still explore Foggy Bottom’s alleys and courts and discover the neat rows of houses blue-collar workers called home as well as 19th-century churches where they worshiped. These historic sites exist cheek by jowl with George Washington University, which established its Foggy Bottom campus in 1912. Sixty years later, on June 17, 1972, a break in at Democratic National Committee headquarters in the nearby Watergate office building changed the course of American history, ensuring the name "Watergate" be forever associated with political scandal. (Less contentious meanings of the word have to do with a cascading stairway and a riverside cafe.) The walk will conclude at the John F. Kennedy Center for the Performing Arts, providing an opportunity not only to see inside the "living memorial" to President Kennedy, but also to take the elevator to the Center's rooftop terrace.  From there, participants will enjoy panoramic views of the surrounding area as well as the newest addition to the Kennedy Center campus, The Reach.

"I really enjoyed the tour. Very interesting - I saw things I did not know about and I have lived in DC for decades." - Goldstar reviewer

Book Now
Where
Embarks from outside the Foggy Bottom Metro station by the bust of George Washington.
Questions? Answers here.